Frame relay(FR) is a data packet-oriented transmission technique for point-to-point connections that was originally developed as a data feeder service for ISDN. Frame relay multiplexes the transmission frames of different transmitting or receiving stations over a line according to statistical aspects and supports transmission speeds between 56 kbit/s and 45 Mbit/s in the process.

Another common feature with X.25 is that frame relay also has a connection-oriented transmission mechanism. The connection is usually established within the user channel as inner-band signaling. However, out-band signal ing via dedicated signaling channels (e.g., the D channel in ISDN) is also specified in the standard. 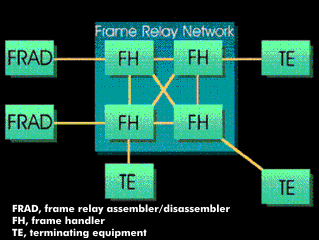 Structure of a frame relay network

A major difference between Frame-Relay and X.25 is the error correction. In frame relay, there is no provision for retransmitting lost or erroneously transmitted data packets between network nodes. The correction of transmission errors is left to the application protocols of the higher layers. Only the validity of addresses and the occurrence of bit errors arechecked.

Frame relay has quickly established itself as a transmission technology especially for inter- LAN connections because it does not require any new communication infrastructure. In most cases, only a software upgrade for existing routers or minor software/ hardware upgrades for X.25 packet switching systems are required. 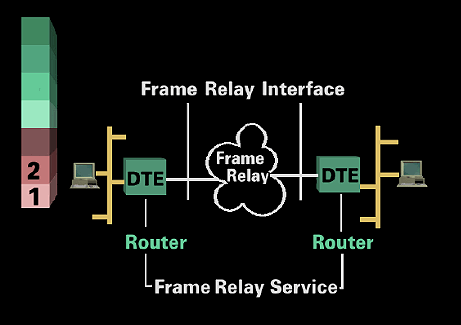 Frame relay, by its very design, is not capable of handling highly changing traffic profiles, such as those expected in the near future. In the field of Internetworking, frame relay will continue to play an important role in the coming years. For typical broadband applications with varying traffic profiles, however, its usefulness is limited.

Frame relay has been standardized by the International Telecommunication Union( ITU) in I.122, I.233 and I.370, as well as Q Recommendations Q.921, Q.922 and Q.933. Frame relay activities are driven by the Frame Relay Forum.