Four wave mixing (FWM) is a technique used to amplify optical signals. In this process, three light signals interact with each other: one signal beam and two pump beams. 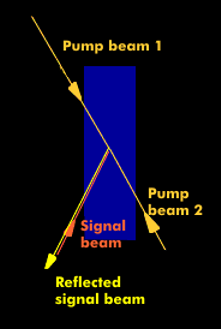 Four-wave mixing is implemented in Optical Parametric Amplifiers( OPA) and is based on four optical waves interacting with each other in the nonlinearities of a crystal or optical fiber. Two beams, a signal beam and a pump beam, create a virtual image that is read out by a second pump beam. The energy of the second pump beam is reflected as a fourth wave in the direction of the signal beam. The method, which uses a nonlinear Kerr effect, is used in optical networks in Dense Wavelength Division Multiplexing( DWDM).