Flying Probe Test (FPT) is an electrical test method for boards and PCBs. With this test method, most defects can be detected. For example, press-fit errors, defective electrical components, assembly errors and solder bath errors that occur in SMT technology and through-hole technology( THT), as well as soldering errors.

The flying probe test has some similarity to the in-circuit test( ICT), but it uses only a few test needles with which the measuring points - solder pads, pins or test pads - on the PCB under test are contacted to detect bonding defects. The tests are performed in the same way as ICT tests, but sequentially, which means that the test points are touched one after the other with test needles, resulting in relatively long test times. However, unlike the ICT test, the Flying Probe test can also be used to contact grid dimensionswith pitches of less than 0.3 mm.

Test methods and their possible applications

The advantages of the ICT test lie in its greater flexibility and the lower cost of the test adapter. The test programs can be quickly and flexibly adapted to changing layouts. Disadvantages are the longer test time, as well as the higher maintenance costs for the wearing test tips and for moving mechanical parts. 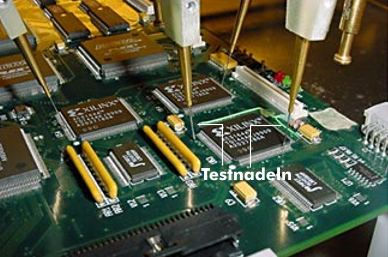 Modern FPT test systems support the so-called electro-scan method, which can also be used to examine invisible solder points on connector contacts or under chips. This method works with field strength measurement.