A floating gate transistor, FGMOS, is the central storage element of flash memories. It is a non-volatile semiconductor memory that was already developed in the 1970s and used in several semiconductor devices. 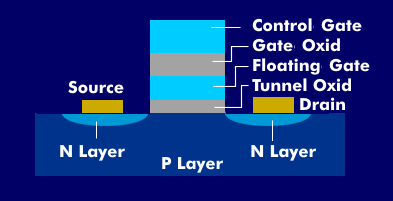 Structure of a floating gate transistor

The floating gate itself is controlled by a quantum mechanical effect, in which a tunnel is formed by a higher positive voltage, via which some electrodes from the control gate migrate to the floating gate. Charge trap flashes(CTFs) are similarly constructed and can be used to achieve a higher storage density.