The mobile communications technologies are represented by mobile communications generations, which are designated by digits. According to this hierarchical structure, the 4th generation( 4G) was dominated by Long Term Evolution( LTE). 5G is the ITU designation for a 5th generation mobile network (5G) with data rates in the gigabit range. 5G is being driven by the 3rd Generation Partnership Project( 3GPP) with the IMT-2020 initiative and is to be understood as a comprehensive concept encompassing various networks, technologies and applications.

An example of 5G standardization is the 5G New Radio (5G NR) air interface, which covers larger frequency ranges. 5G Release 15 based on Long Term Evolution Advanced(LTE-A) is a standard for New Radio. 5G Release 16is about functions for Industry 4.0. This release supports maximum reliability and lowest latency. In addition, it is also about the highly flexible core network. All 5G end devices should be able to operate in 5G networks, regardless of their technology.

5G with data rates in the gigabit range 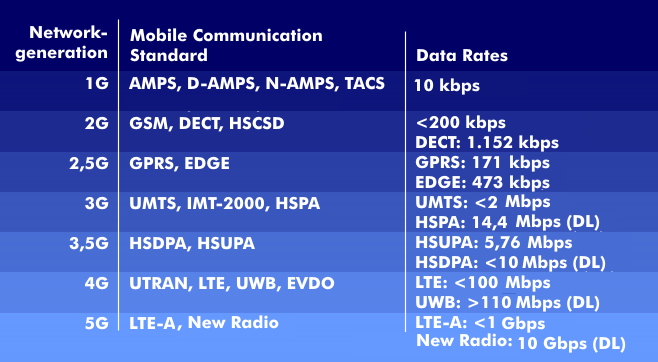 5G technology is primarily about capacity increases. These can be achieved through improved modulation techniques such as generalized frequency domain multiplexing( GFDM), multicarrier mod ulation, quadrature amplitude mod ulation (QAM), carrier aggregation, OFDMA, QPSK, 3D MIMO and massive MIMO, adaptive antenna system( AAS), spatial beamforming, ultra low latency( ULL) with latencies of less than 1 ms, downsizing of radio cells to femtocells, and several other techniques. The technique covered in 5G Release 15 is called Dynamic Spectrum Sharing( DSS) and provides more efficient use of spectrum in the 700 MHz range. It enables simultaneous use of the transmission infrastructure for Long Term Evolution and 5G transmissions in response to demand. Thanks to DSS technology, a faster rollout of 5G infrastructure is possible.

The frequency ranges of 5G

As far as the 5G frequencies used in Germany are concerned, we are talking about the 700 MHz frequency range, which is available as a digital dividend due to digitization, the 2 GHz range and the 3.6 GHz range, whose coverage is comparable to that of UMTS and Long Term Evolution (LTE). The GHz frequency ranges mentioned are those between 1.920 GHz and 1.980 GHz for the uplink and between 2.110 GHz and 2.170 GHz for the downlink. Another frequency range is that between 3.4 GHz and 3.8 GHz. 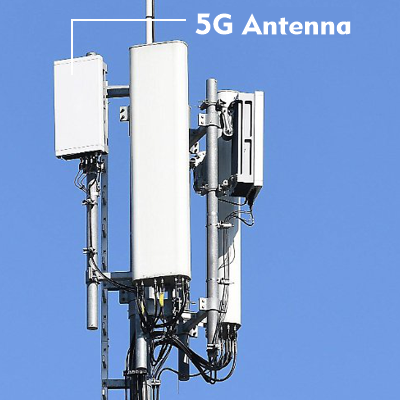 Later, for hotspots, the focus is on frequencies between 24.25 GHz and 27.5 GHz. For frequency ranges above 20 GHz, the bandwidths are 100 MHz, 200 MHz and 400 MHz. With carrier bundling, bandwidths of up to 2 GHz can be achieved. The high frequencies have extremely high free- space attenuation and are used for point-to-point links withmicrowave directional radio. They are less suitable for network coverage of 5G because these frequencies require an extremely high density of base stations and many antennas. In addition to the aforementioned frequencies, the Digital Dividend III frequency band between 470 MHz and 694 MHz for Broadband Fixed Wireless Access( BFWA) is to be used later for 5G.

5th generation mobile networks consist of smart cells of various sizes: microcells, picocells and femtocells. 5G microcells achieve coverage of up to 2 km with a transmitting power of between 2 W and 5 W. Such a microcell can be used by up to 200 mobile subscribers simultaneously. In contrast, picocells used in shopping malls, train stations, halls or stadiums have a transmitting power of 100 mW to 500 mW and cover a range of up to 250 m. Femtocells used indoors transmit at 10 mW to 100 mW. Their transmission radius is up to 50 m and up to 16 users can log in.

5G technology supports mesh networks in which mobile devices act as relay stations for other mobile devices with poor reception. Furthermore, they support Software Defined Networking( SDN) for a more flexible backbone network and Device-to-Device Communication( D2D), where mobile devices within a radio cell communicate directly with each other, thus relieving the base station. In addition, network infrastructure can be partitioned using network slicing, and Network Functions Virtualization( NFV) can be used to ensure high flexibility between the core network with the Next Generation Core( NGC) and mobile access.

In terms of application areas, the 5th generation mobile networks are about mobile services with the highest bandwidth, Enhanced Mobile Broadband( eMBB), mobile computing, social networking, video sharing, machine-to-machine( M2M) communication, traffic control, smart cities, real-time communication on the Web and other mobile services such as e-health, and application areas in the Internet of Things( IoT) or the Industrial Internet of Things ( IIoT). The ITU has defined three service categories for 5th generation mobile communications: Enhanced Mobile Broadband (eMBB) focuses on high-bandwidth services. Ultra-High Reliability and Low Latency Communication( uRLLC) is about latency-sensitive services such as autonomous driving, and Massive Machine-Type Communications( mMTC) is about services with high connection density. Furthermore, high availability and the lowest possible energy consumption are required, which is about one tenth of today's systems.

The areas of application show that, on the one hand, data traffic with high bandwidth, such as occurs in video streaming, must be handled, and on the other hand, individual small data packets containing sensor data in the Internet of Things (IoT) or data from smart wearables are sent via 5G networks. So it is also, or in particular, about the communication of low-cost end devices, the low-end devices. In addition, the services must meet different requirements. M2M communication and car-to-car communication, for example, require extremely low latency times of just a few milliseconds, while public safety radio must meet statutory security standards. In terms of connection density, 5G is expected to network one million terminals per square meter. In total, several billion users and trillions of things can be networked via 5G.