Field effect transistors control the current flow between the source (S) and the drain (D) with the electric field generated by the gate (G). This field allows the gate to establish a conductive channel between the source and drain. A small change in gate voltage has a large effect on the current flow between source and drain. That is why FETs can amplify signals with a relatively low signal level. The conductive channel can be an N or P channel. 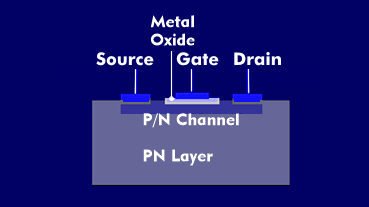 Structure of a MOSFET

When a gate voltage is applied, the electric field propagates into the channel depending on the polarity and the magnitude of the control voltage, affecting the size of the channel and thus the current flow. This is also referred to as the junction or space charge region. 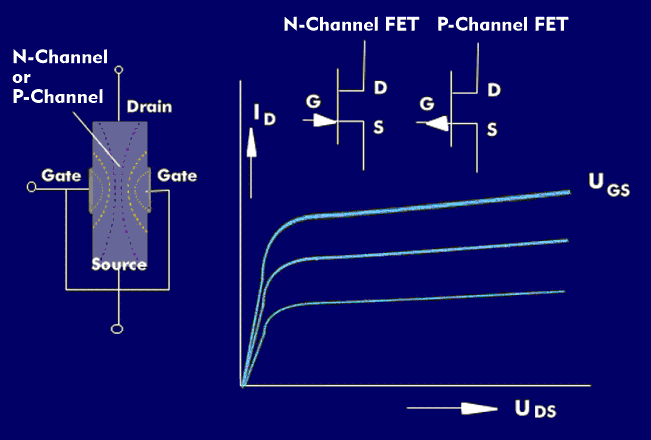 A distinction is made between Junction Field-Effect Transistors( JFET), which has a blocking junction between the gate and the source-drain channel, and the Isolated Gate FET( IGFET), which has an insulating layer between the gate and the source-drain channel. Since this is manufactured using MOS technology, it is referred to as a MOSFET. In this technology, the gate is electrically connected via an insulator, namely a metal oxide layer, and has an extremely high impedance. Thus, no current flows through the gate, and control is powerless. In addition to these technologies, there are also organic field-effect transistors( OFET), which are made of polymers, and the ferroelectric FeFET, which is suitable for memory cells.

With the FinFET and the MuGFET (multiple gate FET), there are variants with multiple gates that enclose the charge carrier channel, which require less energy, can be implemented smaller and have much shorter switching times. They are suitable for microprocessors and SRAMs.