The Fibre Channel(FC) data frame is designed for high-speed transmission of large amounts of data, which is expressed in the length of the data packet, which can be 2 Kbytes and larger with variable length.

The FC data frame consists of the header, the payload and a CRC checksum. The user data of up to 2,112 bytes are embedded in a data frame of 2,148 bytes in total. In addition to the user data, this also contains the start of frame (SoF), the source and destination addresses and the CRC checksum for error detection. In addition to the frame header with a length of 24 bytes, there is also an optional header with a length of up to 64 bytes. The payload is followed by the 4- byte cyclic block check (CRC) and the End of Frame (EoF) data field. 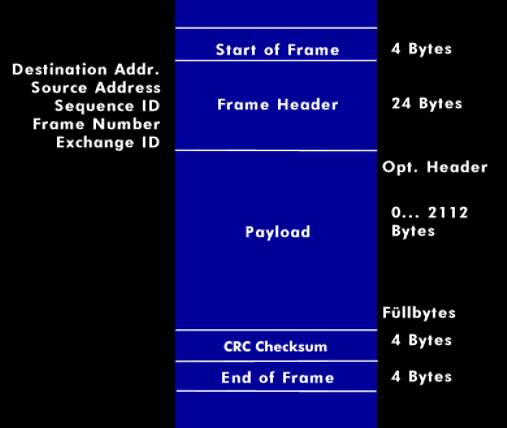 Only 1.5% of the entire data frame is used for header information. The relatively large frame benefits applications that usually consist of large amounts of data, such as video, multimedia applications, and storage applications.