At the beginning of the 1990s, several Ethernet variants with transmission rates of 100 Mbit/s were developed and standardized by IEEE 802.3. These include Fast Ethernet (FENet) to 100Base-T for twisted pair and the HP proposal of a voice-grade version 100Base- VG on telephone cables, which was dealt with in the 802.12working group.

100Base-T is designed as an upgrade from Ethernet to 10Base-T and uses CSMA/ CD as the access method. All network stations are connected in a star configuration via a 100Base-T hub. STP or FTPcategory 5 (cat 5) cables are used as the transmission medium. In addition, STP cables and optical fibers can also be used.

Due to the use of the CSMA/CD algorithm and the possible collisions on the transmission medium that are directly related to it, a tenfold higher data rate of 100 Mbit/s compared to the 10 Mbit/s version results in a length limitation reduced by a factor of 10 to approx. 210 m due to the procedure. 100Base-T can therefore only bridge very short distances and cannot be used for time-critical applications due to the stochastic access method.

Structure of the lower layers of Fast Ethernet networks

There are different interface variants for 100Base-T Fast Ethernet. These are 100Base- T2, 100Base-T4 and 100Base- TX. These Fast Ethernet interfaces differ in the transmission medium used. For 100Base-T2, a TP cable of a lower category, namely category 3, is used. Since a category 3 cable is only specified for data rates of 10 Mbit/s, the concept provided for two pairs of lines (T2) and coding according to the PAM5x5 method. The second 100Base-T variant was 100Base-T4. This variant was designed for four line pairs of category 3 and also works with ternary signal levels and 8B/6T coding. The third interface variant for twisted pair is 100Base-TX. It works with Category 5 cables and uses Manchester coding and 4B5B coding. And then there is 100Base- T1, based on single-pair Ethernet( SPE). This technology, which uses a single pair of wires, was developed for automotive and industrial use. Most versions did not get beyond standardization. Only 100Base-FX, which uses gradient fibers, was of any significance. 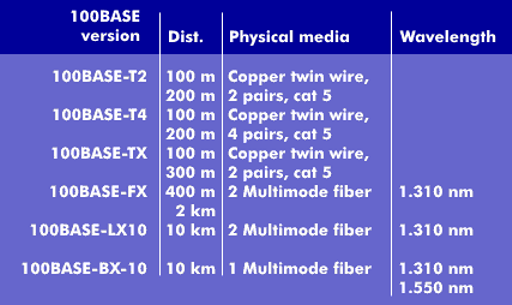 As far as the frame format of Fast Ethernet is concerned, it corresponds to the Ethernet frame, and as far as the Fast Ethernet layer model is concerned, the Ethernet layer model was essentially adopted, only in the physical layer( PHY) the autonegotiation sublayer on the medium dependent interface( MDI) was inserted. This sublayer ensures optimum speed matching between Ethernet components with data rates of 10 Mbit/s and 100 Mbit/s.