Horn loudspeakers or funnel loudspeakers have the shape of a funnel with constantly increasing horn cross-section for sound emission. If the funnel opening runs exponentially, the corresponding horn loudspeaker is called an exponential horn. The sound pressure is generated by the horn driver, which consists of the pressure chamber of an electrodynamic oscillating system, and radiated via the horn attachment, which forms the sound channel. 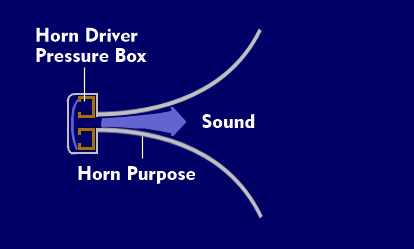 Construction of the pressure chamber loudspeaker

Funnel loudspeakers are specified according to protection classes and used in PA systems. Because of their direction-sensitive sound emission, they are also found outdoors in train stations, in halls, at airports. The lower cut-off frequency is determined by the cross-section of the funnel opening, the funnel size and the funnel constant. The funnel length is decisive for the sound pressure gain. 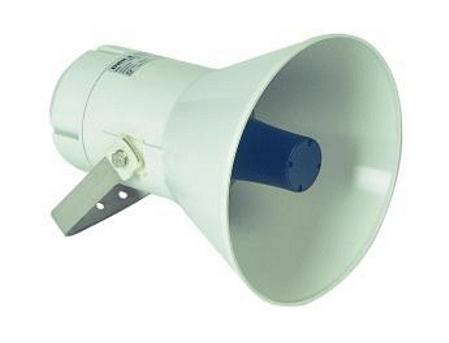 Because the frequency range of funnel loudspeakers favors midrange pitches, they are not suitable for high-quality audio, but for announcements and alarms. The exponentially shaped funnel gives the funnel speaker a lobe-shaped dispersion pattern. Their power ratings range from 10 W to 50 W. PA horn speakers exceed these values many times over and can have power values of several hundred watts as tweeters. PA woofers even reach over a thousand watts of rated power handling.