To improve the signal-to- noise ratio or to suppress noise during audio playback, early methods were developed in which the higher frequencies of the audio signal were boosted in level before recording or transmission and then lowered again later, during playback.

Emphasis is the process of overemphasizing the frequency spectrum in certain frequency ranges in terms of level, which is referred to as pre-emphasis. The equalization, de-emphasis, starts before playback and reverses the frequency overemphasis so that the audio signal is reproduced without distortion.

The Emphasis technique is used in FM broadcasting and compensates for the disadvantage of frequency modulation, which translates into a lower signal-to-noise ratio at higher frequencies. It is also used to reduce tape noise in DAT drives and in CD recording. 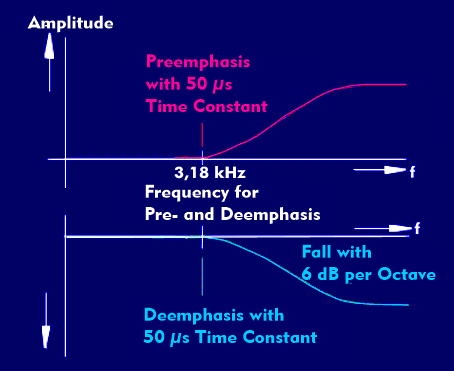 In FM broadcasting, the higher frequencies are boosted in level by 6 dB/ octave before modulation. In Europe, this pre-emphasis is done by a high-pass filter with a time constant (RxC) of 50 µs. In the USA the time constant is 75 µs. During playback, the treble boost is reversed by de-emphasis with a low pass of 50 µs (75 µs). From the time constants the cutoff frequencies can be calculated. These are 3.18 kHz at 50 µs and 2.12 kHz at 75 µs (USA).

With the Emphasis technique, an improvement of more than 10 dB in the noise margin is achieved. It is also used in sound recording and is also used in compact disc (CD) recording. In Digital Audio Tape (DAT) and CD recording, pre-emphasis is enhanced by a second time constant. This is 15 µs and starts at 10 kHz.