In addition, this technology is also used in the media-independent Ethernet interfacesRGMII, SGMII and XAUI and in data transfer; also with the aim of doubling the data transfer rate. 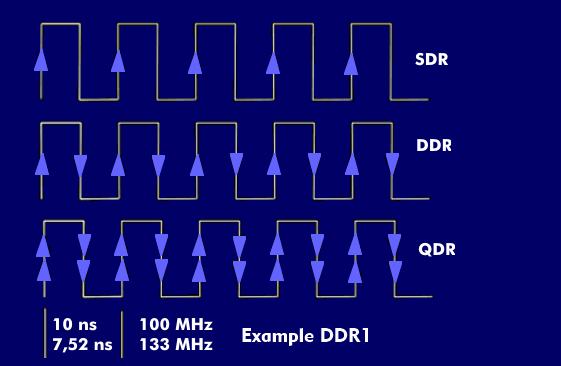 In principle, DDR technology uses each edge of the clock pulse, the rising as well as the falling edge, to synchronize the read-in and read-out process. Each edge therefore represents a data word. This technology has the advantage that the clock rate of the Front Side Bus( FSB) remains unchanged, although the data throughput is doubled. A further doubling of the data transfer rate is achieved with the QDR method, which transfers two data packets in each clock edge.

The low power versions LPDDR (Low Power DDR) operate with considerably lower supply voltages than the normal DDR versions. For example, LPDDR3 operates with a supply voltage of just 1.2 V and LPDDR4 with only 1.1 V.

The DDR process, which was first introduced in 1999, is an open standard that can be used license-free.