In the mid-1980s, it became clear that the address management of all computers connected to a network in a central file would very soon no longer be able to cope with the constantly growing number of network participants. For this reason, TCP/ IP was expanded in 1986 to include an address and naming system that enabled every network subscriber to easily locate every other subscriber: the Domain NameSystem( DNS).

This eliminated the need to store the entire list of all other network nodes on each network node. Dedicated computer systems, address and name servers( NS), answered address requests from local systems.

The domain name is a hierarchical name in which the individual domains are separated by dots. The computer name (www) is followed by a sub-domain that identifies the company or organization, example: siemens. This sub-domain is followed by the domain with the highest priority, the Top Level Domain( TLD). TLDs are country domains, also called two-letter domains. Germany is identified by "de", Austria by " at", the USA by "us", etc. Instead of the two-letter domain, however, the domain address can also contain a three-letter domain or a four-letter domain. 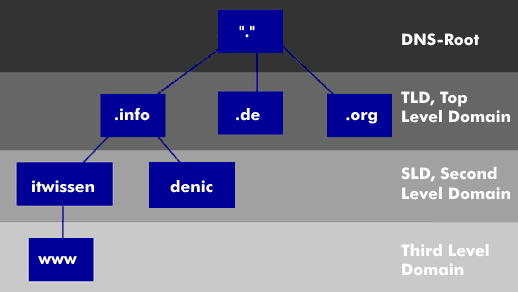 A participant within a domain is prefixed to the domain name by its name and the at sign @, also known as a bracket monkey: Mustermann@aol.de.