DigitalVideoBroadcasting (DVB) started in 1993 with the aim of developing European standards for digital broadcasting, digital TV, multimedia services and interactive distribution services. These can be distributed via broadband cable networks using DVB-C, via terrestrial networks using DVB-T, with handhelds as DVB-H and DVB-X, via satellite as DVB-S, or via telecommunications networks.

DVB terrestrial, via cable and satellite

Since the Europeans also wanted to transmit voice and video in their standard, the two organizations DVB and Digital Audio and Video Council( DAVIC) joined forces in the mid-1990s to form the DVB/DAVIC standard also known as DVB/RCCL (Return Channels for Cable and LMDS). This standard, designated ETS 300 800 by the European Telecommunications Standards Institute( ETSI), is suitable for transmission in both HFC networks and wireless LMDS networks. The International Telecommunication Union( ITU) has adopted this standard under the ITU designation J.112. 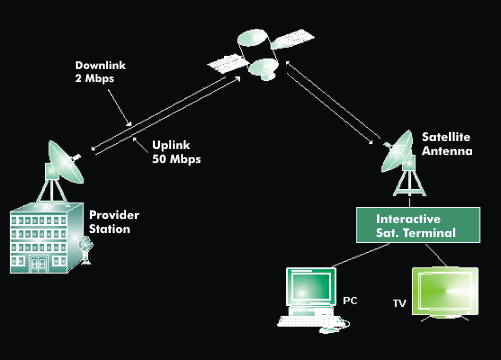 Return channel solution based on the DVB-RCS standard

Based on the available DVB specifications, the specifications for DVB-RCC (DVB Return Channel for Cable) were developed and standardized. This standard includes in-band and out-of-band transmission and provides an additional data channel.

In addition, the DVB organization has adopted a standard for satellite communications, DVB-RCS (Return Channel for Satellite). Based on this standard, terminal equipment of the next generation can receive digital television programs and computer data at transmission rates of up to 50 Mbit/s and communicate with the satellite via return channel at up to 2 Mbit/s.

DVB with return channel for all DVB technologies

The use of DVB is regulated by the usage guidelines, which specify the technical performance characteristics for reception. Depending on the quality requirements, a distinction is made between digital TV with low quality, Low Definition Television( LDTV), with standard quality, Standard Definition Television( SDTV), with studio quality, Enhanced Definition Television( EDTV), and high definition television with High Definition Television( HDTV). The quality differences in sound concern mono, stereo and Dolby Surround. In addition to DVB, DOCSIS, which was developed by CableLabs and standardized by the International Telecommunication Union (ITU), is increasingly gaining acceptance in broadband cable networks in Europe with EuroDOCSIS. Well over 200 companies, institutes, broadcasters, carriers and organizations are involved in DVB activities.