In the context discussed at ITWissen.info, a membrane is a vibrating structure that can absorb and release pressure. Membranes are used in sensors, microphones, loudspeakers, batteries and fuel cells.

The shape of diaphragms always depends on their application. In microphones and pressure sensors, diaphragms can be thin metal or plastic disks, known as flat diaphragms; in loudspeakers, they are cone-shaped structures made of polypropylene or hard paper; and in the case of dome speakers, they are hemispherical. 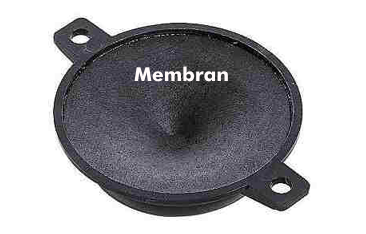 Loudspeaker diaphragms move in rhythm with the alternating voltage applied to the voice coil. The force exerted on the diaphragm is the product of magnetic induction, which depends on the signal voltage, and the wire length of the voice coil. In the case of cone-shaped diaphragms, above certain frequencies the movement no longer occurs uniformly with the applied signal, but the diaphragm generates additional oscillations, partial oscillations or intermodulation distortions through its own movement, which are superimposed on the actual diaphragm movement or counteract it. This can be reduced by increasing the membrane stiffness. To increase diaphragm stiffness, the cone diaphragm is constructed in multiple layers from several materials with different stiffness.

The shape of loudspeaker cones has a direct influence on the sound wave dispersion and thus on the dispersion characteristics.