In antenna technology, the radiation power of the antenna is specified in decibels isotropic (dBi). The reference value of 0 dBi refers to the antenna gain of an ideal omnidirectional antenna that receives or transmits RF radiation isotropically from all directions.

The directivity of an antenna is given by the ratio of the maximum power density to the average power density of an isotropic omnidirectional radiating antenna. 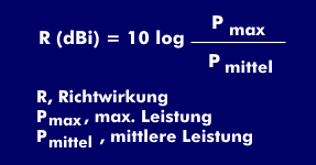 Determining the directivity of an antenna in dBi

The dBi value is given in data sheets as antenna gain value. Since at lower frequencies the antenna gain is determined with a half-wave dipole and specified in decibel dipole( dBd), there is a direct relationship between the two dB values, which allows conversion from dBi to dBd and vice versa: 0 dBd corresponds to 2.15 dBi.