The physical lines could be used several times by interleaving the data packets over time( multiplexing). Datex-P offered transmission speeds between 300 bit/s and 1,920 kbit/s, and up to 255 logical channels could be formed per connection. In addition to X.25, Datex-P supported X.28SNA architecture and frame relay. The fixed or dialed connections were only switched through logically; there were dial-through options for main connections with sub-addresses. In addition, closed user groups could be formed via Datex-P.

Datex-P offered fixed and dialed virtual connections as well as the option of connecting via satellite. Access from other networks was possible from ISDN, as well as from the analog telephone network and the mobile network. 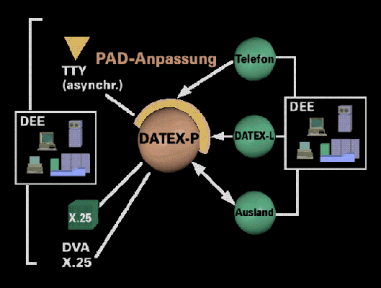 The Datex-P host connection was characterized by its high transmission rate. This was 64 kbit/s, but it could be increased N times. The maximum speed was 1.92 Mbit/s. The host connection also worked synchronously with the X.25 protocol.