The task of the link layer, layer 2 of the OSI reference model, concerns the error-free transmission of frames via transmission sections that connect two stations without the interposition of switching nodes. This function is referred to as bridging.

Unsecured system connections are modified to secured system connections by this layer. It abstracts from the physical connection paths. Its role is to manage the connections. This includes requesting and releasing. It combines sequences of information into data packets or resolves (larger) logical units coming from an upper layer into (smaller) data packets. Errors are considered in the context of whole data packets. In addition, errors that cannot be detected at the physical layer are detected and partially corrected here. 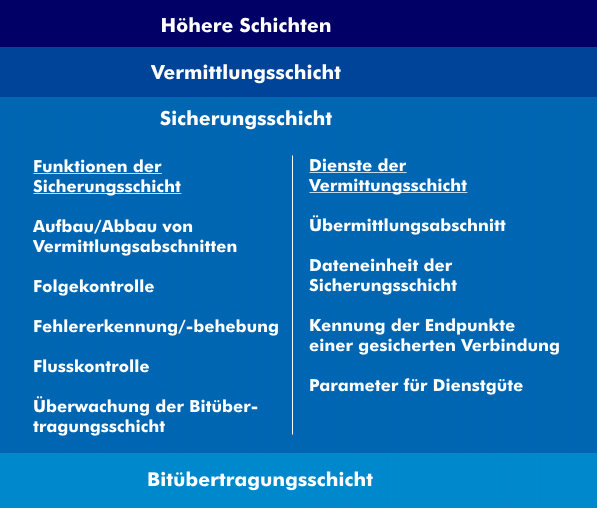 Services and functions of the data link layer

The data link layer of the OSI reference model has been functionally specified by the IEEE for the area of local area networks by the two sub-layers Logical Link Control( LLC) and Medium Access Control( MAC), whereby several MAC specifications have been adopted. For secure data transmission, the International Standards Organization( ISO) uses the HDLC protocol as the transmission protocol. A variant of HDLC, LAP B, was used in Datex-P. Specifically for local area networks, IEEE has developed standards for the link layer that have been adopted by ISO. In addition to flow control and error detection, the IEEE standard also deals with access to the transmission medium in layer 2.