The Data Exchange Interface (DXI) is an ATM Forum specification described in RFC 1483. DXI is a frame-oriented protocol that specifies how network components such as bridges, routers, or hubs in an ATM network or Switched Multimegabit Data Service( SMDS) interoperate with a Data Service Unit( DSU) that supports the Segmentation And Reassembly Sublayer( SAR) function.

Originally, the DXI interface was specified as a data feeder protocol for metropolitan area networks( MAN). Since there was no ATM-specific DXI specification, many manufacturers also implemented the SMDS-DXI as a High Speed Serial Interface( HSSI). In 1993, the ATM Forum defined a modified DXI specification, ATM-DXI, which was, however, incompatible with the SMDS-DXI of the time. 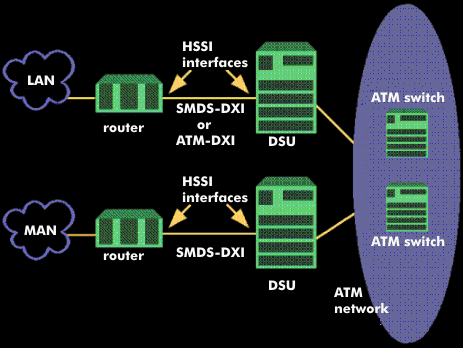 The functions of HSSI and DXI as a data feeder service