A quartz (XTAL) is a crystal. Inelectronics and communications technology, quartz crystals are used for generating and selecting frequencies in oscillators and filters because they are characterized by high temperature stability and low phase noise.

Quartz crystals have two resonant frequencies that are close to each other. At the lower one, the crystal behaves like a series resonant circuit; at the upper one, it behaves like a parallel resonant circuit. Both resonant frequencies are characterized by different properties in terms of stability. Due to the extremely high values for the inductance, high quality factors result which cannot be realized with conventional circuits.

The properties of quartz crystals and the quartz section

Quartz crystals are cut out of suitable crystals in a specific section and change their shape when a voltage is applied. This phenomenon, known as the piezoelectric effect, can be used to convert electrical energy into mechanical energy and mechanical energy into electrical energy. Since the oscillations are very constant and have high spectral purity, quartz crystals are used as resonant elements in filters and oscillators because of their low damping and high long-term constancy. The frequency range of quartz crystals is between 100 kHz and about 200 MHz and above. There are exceptions, however, such as clock crystals, whose quartz frequency is 32.768 kHz. This frequency corresponds to `2^15` and can be divided with flipflops to a clock frequency of one second. 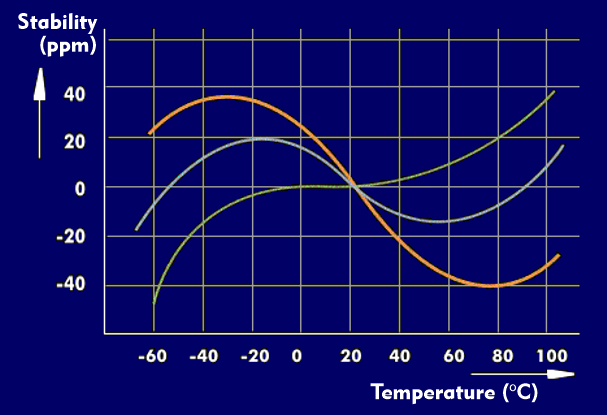 The crystal cut determines the characteristics of the crystal in terms of its frequency stability and temperature coefficient. The best known cuts are the AT, BT and SC cuts. In addition, there are many other quartz cuts such as the CT, DT, MT, H, NT, X and the XY cut. The thickness of the cut determines the resonant frequency: the thinner the quartz cut, the higher its resonant frequency. An electrode for the electronic contact is connected to both sides of a cut. The quartz frequency is picked up via this electrode. In addition to the fundamental wave, the 1st harmonic, the quartz also generates harmonics, the 3rd, 5th, 7th and further harmonics.