Copper-indium- selenium(CIS) is an amorphous semiconductor material used in photovoltaics. It is used instead of silicon( Si) for the production of thin-film solar cells.

CIS cells consist of multiple layers of differently doped copper indium diselenide. The composite material can be vapor deposited onto glass or stainless steel foil. Since CIS solar cells require relatively little of the semiconductor material due to the vapor deposition process, they can be manufactured at low cost. 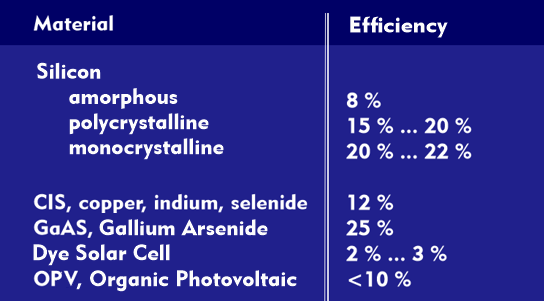 The efficiency of amorphous semiconductor materials such as copper indium diselenide is about 12 %, which is lower than that of monocrystalline or polycrystalline silicon. However, CIS solar cells with an efficiency of over 20 % have already been produced in research facilities .

Copper indium diselenide has a band gap of 1.02 eV(electron volts) between conduction band and valence band, which can be increased by replacing individual elements or by other combinations such as copper indium gallium selenide( CIGS).