The contactless chip card, also known as the C2 card, is the same size as the contact chip card in ID1 format of 85.6 x 53.58 x 0.76 mm, but it has no electrical contacts. Contactless smart cards, which also include the RFID card and the transponder card, are divided into the Close Coupling Integrated Chip Card( CICC), which has the smallest range of only 1 cm and is standardized in ISO 10536, the Proximity Integrated Circuit Card( PICC) for distances of up to 10 cm, which is standardized in ISO 14443, and the and Vicinity Integrated Circuit Card( VICC) with a range of more than one meter, which is specified in ISO 15693.

Data is transferred between the contactless chip card and the RFID reader wirelessly via the air interface, the Contactless Chipcard Interface( CCI), using inductive or capacitive coupling, without the need for the chip card to be in a specific position. Contactless smart card readers, such as proximity coupling devices(PCDs), are not subject to wear and tear and can be placed behind paneling or under plaster. One of these technologies is near field communication( NFC). In addition to the aforementioned contactless smart cards with near-field coupling, there is a specification for far-field coupling according to ISO 18000, with which a distance of more than 3 m can be bridged. 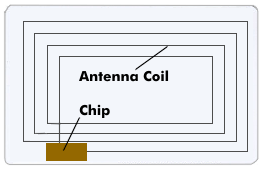 The standard provides for radio frequencies of 125 kHz and 13.56 MHz, but also 4.9 MHz. In general, 13.56 MHz is used as the carrier frequency, which is specified in various standards. To receive the reader's radio signals, there is a large- area antenna coil on the contactless smart card, which, in conjunction with a capacitor, forms a resonant circuit for the corresponding radio frequency. At the higher frequency, the antenna consists of a few turns, unlike at 125 kHz, where the antenna coil requires a higher inductance.

The power supply of the contactless smart card

The contactless smart card is powered by induction via the CCI interface from the reader. The voltage induced via the resonant circuit is used as the supply voltage. In addition, the clock signal is derived from the radio frequency of the reader, which serves as the system clock for the microprocessor on the smart card.

The data transmission from the reader to the contactless smart card is performed by amplitude shift ke ying( ASK). In the reverse direction, data is transmitted by load modulation, in which the resonant circuit is loaded and unloaded by switching a load resistor on and off. The signal received in the reader is again an ASK signal, but with an extremely low modulation level. 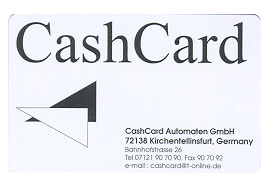 Since the reception of the load-modulated signal is very critical, other, secure modulation methods have been used. In addition to frequency shift keying( FSK), two- phase shift keying(BPSK) is therefore also used. Other methods operate at 13.56 MHz with a subcarrier of 847 kHz. The subcarrier is modulated with the data and generates two sidebands above and below the radio frequency. The reader is set to one sideband and can be very sensitive to the radio signal.

The ISO distinguishes two transmission techniques between the downlink from the reader to the smart card and the uplink in the reverse direction, these are referred to as type A and type B. In type A, the downlink operates at 13.56 MHz with amplitude shift keying and 100% modulation depth, while the uplink operates with subcarrier, amplitude shift keying and Manchester coding.

Type B of ISO 14443 operates in the downlink with 10 % modulation depth, in the uplink also with subcarrier, but with two-phase shift keying and NRZ coding.