Ininformation technology, the complement is used to represent negative numbers, allowing a subtraction of binary numbers to be traced back to an addition. For this application, computers work with the ones complement and the twos complement. 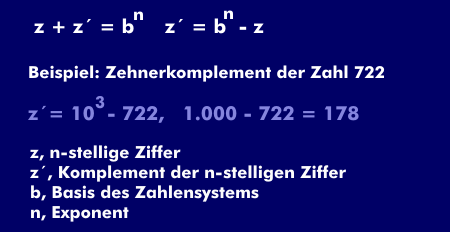 Determination of a complement of ten

When forming negative numbers, the exponent is reduced by one digit and thus the result is divided into two equal parts of which one part represents the positive values, the other the negative values. In the hexadecimal system, there is a value range from "0" to 65.535. If this is divided by the described procedure into two equal value ranges, the one from "0" to 32.767 and the one from 32.768 to 65.535, then the positive numbers from "0" to +32.767 can be assigned to the first value range and the negative numbers from "0" to -32.768 to the second. Only the 16th bit is used for differentiation.