Ceramic capacitors, known as Kerkos for short, are characterized by a much more compact design than all other solid capacitors. The capacitance-to-volume ratio is many times higher than that of tantalum capacitors or film capacitors.

Compared to film capacitors, ceramic capacitors have a 50-fold higher compactness, and compared to tantalum capacitors they are characterized by lower electrical losses. In addition, they are non-polarized, have a lower impedance, very low ESR values and a high reliability. The compactness results from the ceramic dielectrics with a permittivity of up to 10,000 and above.

Structure of a multilayer ceramic capacitor

Ceramic capacitors consist of a monolithic ceramic block with comb-like sintered internal electrodes. The dielectric is formed by thin breakdown-resistant ceramic, made of titanium dioxide( TiO2) or barium titanate( BaTiO3). The electrodes are sintered into the ceramic material and are made of nickel or silver- palladium and are led to the outside of the ceramic block, where they are contacted. The electrodes can be contacted with noble metals, Noble Metal Electrode( NME), or with simpler metals, Base Metal Electrode (BME). Depending on the ceramic materials and contacting, a distinction is made between several classes, the DIN or EIA classes. One dielectric specified by the EIA is C0G dielectric (NP0), with a negligible temperature coefficient. 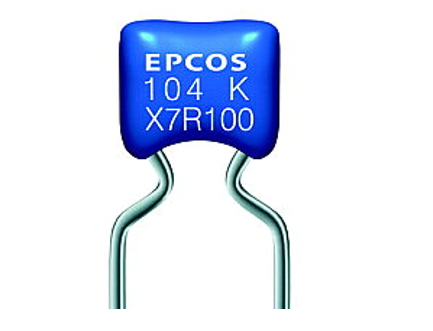 Ceramic capacitors based on titanium compounds are Class 1 and have a low permittivity between 10 to 400, and their insulation resistance is at least 10 giga-ohms. They are used in resonant circuits, filters and oscillators because of their high constancy and stability. In contrast, class-2 ceramic capacitors have high dielectric constants of up to 1,000. They are based on barium titanate and are used as interference suppression capacitors in filter circuits and as buffers. The capacitance values are in the pico- and nanofarad range. Other applications include high- voltage technology and protection against electrostatic discharge( ESD). However, they cannot handle short voltage pulses of more than 5 kV.

Multilayer ceramic( MLC) capacitors have a much more compact design, and their capacitance-to-volume ratio is many times higher than that of normal ceramic capacitors.