The CSMA/CA method - CA for Collision Avoidance - avoids unnecessary additional collisions by ensuring that conflicting transmission requests are not processed randomly but in a priority-controlled manner, thus achieving deterministic behavior similar to the token method. The CSMA/CA method is used, among other things, in 802.11 wireless networks. 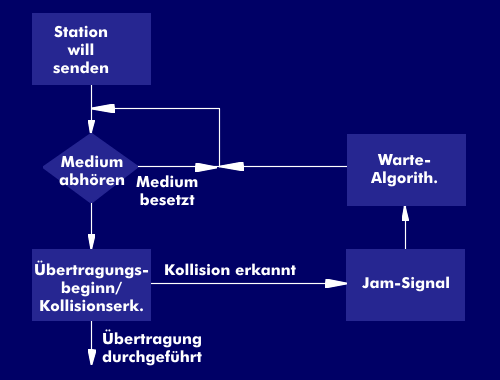 In the CSMA/CD method - CD for Collision Detection - the stations wishing to transmit detect collisions on the transmission medium, whereupon they briefly withdraw their transmission request and start a new transmission attempt after a changing delay time. In the case of CSMA/CD, this is referred to as the binary exponential backoff( BEB), and in the case of WLANs with CSMA/CA procedures, it is referred to as the contention window. A station may only transmit if the medium is not already occupied by another station. If the transmission medium is occupied, the station waits until the medium is free and it can transmit.

The CSMA/CR procedure is a multiple access procedure used in the CAN bus, which works with arbitration to avoid collisions, in which the stations have a mutual agreement on the right of access.