When the sound pressure hits the speech diaphragm in the microphone capsule that forms the speech electrode, it moves and changes the capacitance of the capacitor due to the electrical bias. The distance between the two electrodes is only 5 µm to 50 µm. The change in capacitance occurs in rhythm with the change in sound pressure, i.e. the sound signal.

The charge balance between the two electrodes takes place via a resistor and causes a voltage which is amplified via an operational amplifier. To prevent the diaphragm from oscillating through the quiescent state and thereby distorting the signal, the diaphragm electrode is biased by a polarization voltage. This phantom power, which also supplies the microphonepreamplifier integrated in the microphone and is normally 48 V, is applied to the shielding of the microphone cable and to the two signal-carrying lines. 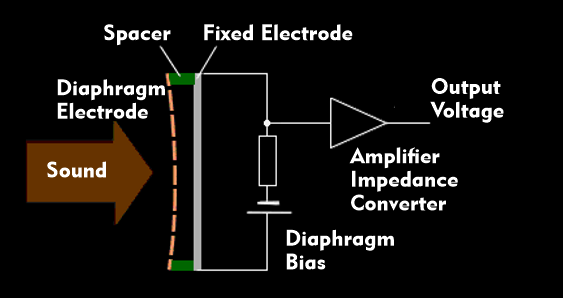 Structure of a condenser microphone 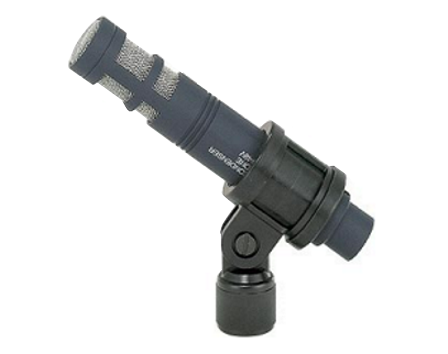 Condenser microphones cover a wide frequency range with a linear frequency response, have a high sensitivity, ranging from 10 mV/ Pa to about 40 mV/Pa, and good impulse response. The sound pressure is precisely converted into electrical signals. Disadvantages are the necessary supply voltage, the low limiting sound pressure and the high output impedance. Condenser microphones can have different polar patterns: Eight, cardioid and omnidirectional.