Call Waiting (CW) is a service feature in digital telecommunications networks. With this service feature, an incoming call request can be signaled acoustically by the call waiting tone or optically during an existing call. This service feature allows subscribers to remain reachable by others even during a call.

The call waiting service feature is also offered for multi-device connections and is adopted by PBXs. The called party recognizes the caller's number on the display and can respond immediately to the call waiting by disconnecting the existing call and letting it rest in order to accept the second call. This switching back and forth between the previous caller and the waiting caller is called toggling. If the waiting subscriber is actively connected to the existing call, this is called a three-party conference. 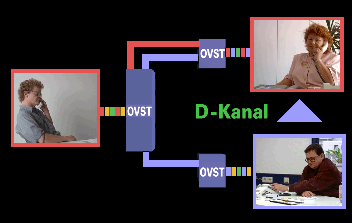 In the case of call waiting, the calling party hears a ringing tone, while the called party hears the call waiting tone. Like most audible tones, this has a frequency of 425 Hz. However, it differs from the busy tone in that the interval between the tone signal and the pause signal is shorter (200 ms). If the subscriber does not comply with the call waiting party's connection request within 30 seconds, a busy tone sounds instead of the ringing tone.