The cantilevers are flat shelves on which the cables are placed. To ensure a certain order and prevent the cables from slipping off the shelf, they are U-shaped and divided by dividers. For shielding reasons, metal trays made of U-shaped bent, perforated or unperforated sheet steel are used. If several metal trays are installed one above the other, then the various cables for the mains voltage, auxiliary lines and IT networking should be placed on separate steel trays. This avoids crosstalk and electromagnetic interference as far as possible. Metal trays are available in open and closed designs. The latter are used where the routing is visible to everyone and freely accessible. For example, in underground garages or airport buildings. 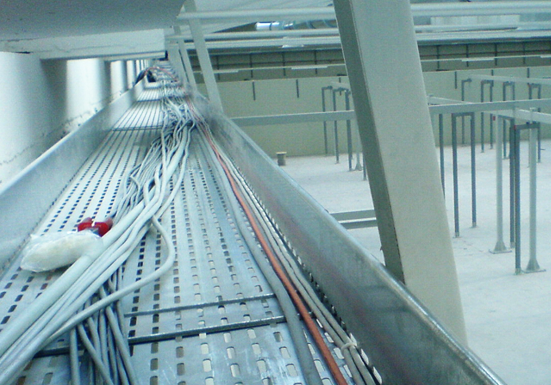 They thus form a certain protection against unauthorized access and also have a better electromagnetic compatibility( EMC). It should be noted that the route is grounded.

Another constructive design is the lattice tube route. The advantage of this type of cable tray is that the cable can be routed to cable ducts or distribution cabinets directly through the grids. The lattice tube route does not provide protection against electromagnetic interference.

Cable route, fastening and cable routing in the case of the lattice tube route

Another type of route construction is made using brackets that are fixed to the ceiling at short intervals and into which the cables are laid. This relatively simple and inexpensive method of routing should be used only in exceptional cases, because it has some disadvantages, namely mutual inductive interference.