Boundary scan technology (BScan), also known as boundary scan test (BST), was standardized in 1990 under IEEE 1149.1. Boundary-scan can be used to perform electrical tests and on- board programming of assembled printed circuit boards. 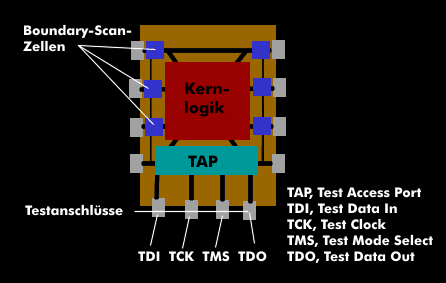 Structure of a boundary-scan IC with the four test connections

Semiconductor manufacturers offer components with a corresponding boundary-scan port as standard. These are usually referred to as Joint Test Action Group( JTAG) after the standardization body. In boundary-scan, the scannable devices form test clusters and test networks within the board, which is connected to the test system via four lines.

Creating the test software takes only a few days, especially since it is possible to test the assemblies individually throughout the development phase of a board and reuse this test data later during prototype and production testing. Boundary-scan detects the same defects as the other test methods. These include defective electrical components, press-fit defects, solder defects, and placement and solder bath defects in SMT and through-holetechnology( THR).

The JTAG standards IEEE 1149.1 define the specifications of the TAP bus as well as the scan cells: