Beamforming is not only used in antenna technology, where the radiation pattern is changed accordingly, but also in acoustics to improve the sound of compact mobile devices such as tablet PCs or notebooks.

Beamforming for optimizing the radiation pattern of antennas

Beamforming is one of several smart antenna technologies, the smart antenna, for increasing the field strength at the receiving end. Others include multiple input multiple output( MIMO), spatial multiplexing( SM) and maximum ratio combining( MRC). 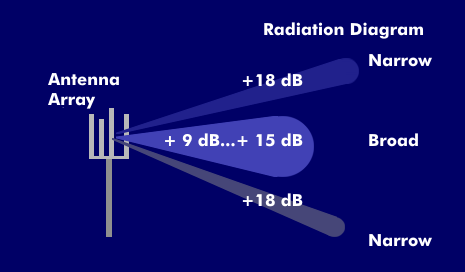 The sound quality and stereo effect of compact mobile devices such as tablet PCs or notebooks is relatively limited due to the tiny speakers and the small distance between them. In order for these compact mobile devices to still produce surround sound, speaker arrays with beamforming are used. A speaker array is an arrangement of several speakers next to each other; beamforming is intended to give the listener the impression that the sound sources are further away.

Due to the small distances between the speakers in a notebook or tablet, stereo reproduction with surround sound is not possible because the listener cannot distinguish the left and right speakers aurally. This disadvantage is remedied by various concepts that achieve an individual, voluminous sound experience. These methods are based on interference with which the sound waves are raised or weakened at the listener. 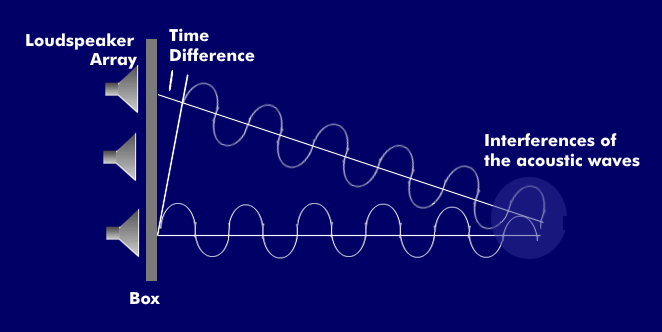 For example, if the same sound signal is emitted in the same phase from the two outer speakers of a loudspeaker array, it reaches the listener with minimal time difference. If the signal with the shorter path is delayed by this time difference, then both signals arrive in phase and superimpose to form a sound signal of higher amplitude. The sound pressure perceived by the listener will increase by 6 dB if the signals are completely identical. On the other hand, the sound waves can also superimpose in opposite phase, and the resulting interference can cause the sound waves to cancel out. Active Noise Cancelling( ANC) takes advantage of this.

The sound waves can trigger different spatial impressions in the listener by shifting over time, especially since the sound waves of all the loudspeakers in a loudspeaker array, which usually consists of four loudspeakers, can be individually time-delayed and changed in amplitude. As a result, digital signal processing( DSP) can be used to improve the sound quality and emphasize the spatial auditory sensation.

Acoustic beamforming is not about emitting sound, but about recording sound. It is about locating noise sources such as engine noise, squeaking of moving parts or rattling of panels in motor vehicles so that they can be reduced or eliminated. These noises are called BSR noises, which stands for buzz, squeak and rattle. The beamforming used for this purpose works with microphone arrays and determines the direction in which the noise source is located from the time delays of the sounds hitting the microphones.