Basic Input/Output System (BIOS) is a mini-operating system of personalcomputers, notebooks or other computers that contains the firmware and controls the input and output functions of the computer. BIOS is written in a programming languageclose to hardware and is the actual interface between hardware and software.

The BIOS contains the basic hardware configurations at system startup and loads the operating system. After switching on a computer, the operating system sends a request to the BIOS. The BIOS is initialized by booting, which performs the POST (Power On Self Test) self- test. Afterwards the BIOS routines are processed and the communication with the hardware components like keyboard, mouse, drives, hard disk, RAMs and monitor is started. 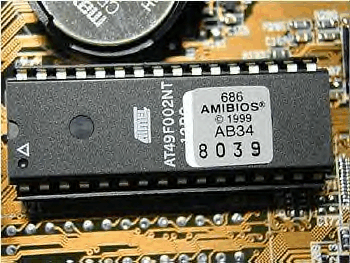 The instruction set stored in the BIOS is written in the computer's machine language and is permanently stored in one or two chips, typically Programmable Read Only Memory( PROM), Erasable PROM( EPROM) or Electrically Erasable PROM( EEPROM). This has the advantage that when the personal computer( PC) is delivered, the BIOS is already hard-coded and always available and cannot be damaged by hard disk errors. The BIOS also ensures that a personal computer can boot itself.