Automation deals with the use of control and processing functions that start, monitor and stop individual or interconnected operations of machines.

As with other technical equipment, communication is a determining factor in the automation process. The communication infrastructure is becoming increasingly direct, ranging from sensors and actuators to the field level with field devices and the process level with programmable controllers. It is divided into different vertical hierarchy levels: The field level, process level and control level. Communication in the individual levels and between the levels takes place via field buses, such as the Profibus, HART, CANbus, VARAN bus or Interbus to name just a few, and via special interfaces such as the Actuator Sensor Interface( AS-i) for the sensor- actuator network. The amount of data increases continuously from the field level via the process level to the control level. 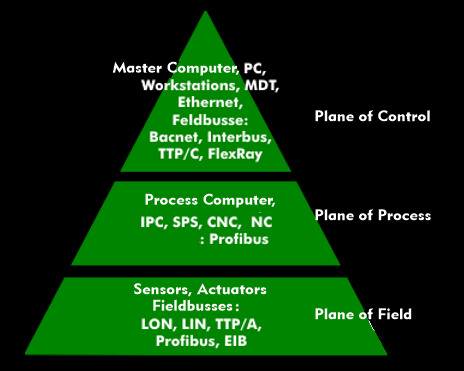 In order for manufacturing equipment to be integrated into the corporate communications infrastructure, the communication protocols of the fieldbuses are aligned with common transport and network protocols such as the TCP protocol and the IP protocol.

As classic automation solutions are increasingly reaching their limits, modern information technology is also being used in this area. This can be seen in industrial computers for control technology, in industrial Ethernet, in the connection of production to corporate EDP via TCP/IP, in multitasking operating systems for complex automation tasks, and in much more.