Intel's 32-bit Atom CPU was developed especially for mobile computers like UMPCs, Mobile Internet Devices( MID), subnotebooks and netbooks and is characterized by an extremely low TDP value, Thermal Design Power (TDP). Depending on the CPU variant, this lies between 0.6 W and 4 W in active operation and can be reduced to less than 0.1 W in several sleep and power saving modes. Beyond that, the central processing unit can also be completely deactivated.

The Atom processor is relatively inexpensive, it is manufactured in 45 nm technology, can operate at clock rates between 800 MHz and 1.8 GHz, has a level 1 cache( L1) of 56 KB, a level 2 cache of 512 KB and a front side bus( FSB) with a clock rate of 533 MHz. The Atom CPU supports Hyperthreading, has an instruction set extension up to SSE-3 with StreamingSIMDExtension(SSE) and is operated in CPU socket 441. The CPU chip with its 47 million transistors has a size of only 3.1 x 7.8 mm, the BGA package 22 x 22 m small and 1.6 mm thin. 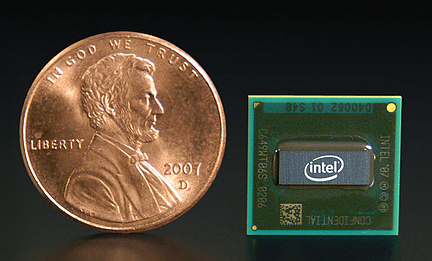 With its low supply voltage, the Atom processor belongs to the low-voltage processors, the ULV processors. It is available as a single-core and dual-core processor.