The @ character, pronounced "ett", which is also known as the commercial "a", is mainly used as a wildcard and control character. It is most frequently used in e-mails, where it separates the user name from the hierarchically structured domain name in the e-mail address. Example: Klaus.Mustermann@Firma.de. @ is called a separator because it separates the personal part from the machine part in the e-mail address. In German, the term Klammeraffe has also become common.

The @ character was first defined for electronic mail, Electronic Mail, in 1971. It was also used in Bell's Multics operating system, but the Internet community overrode the concerns of Multics programmers. The at character has the decimal position 64 in the ASCII character set, hexadecimal it is 40. Since the year 2000 it can be found on QWERTY keyboards under the letter "Q". The key combination: Ctrl/Alt/Q must be pressed. On a Mac keyboard, the at sign is activated with the key combinations Apple+1, Apple+2 or Apple+L. 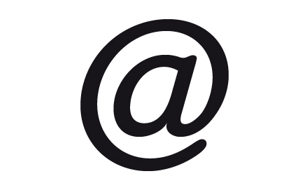 The @ sign is also used in annotations as part of the basic structural elements for predefined annotation types. The at sign is also used on Facebook, Twitter, and blogs, but has different functions there. On Facebook, if the at sign is in front of the name and it is clicked, it takes you directly to the user profile. In blogs, the at sign can also be in front of a name. In this case, the at sign indicates that a person has replied to a comment or question. Specifically, it would look like this: @klaus, "ITWissen.info is informative". The at sign is used as a salutation in this context: "to klaus".

On Twitter, the at sign is used to refer to user profiles, locations, or images with the URL.