For ADSL communication, an ADSL modem must be installed on both sides of the access line, both in the local exchange and at the subscriber's premises. In the ADSL process, the copper line is divided into three channels: The downstream channel from the service provider to the end customer, the upstream channel in the opposite direction, and a channel over which PSTN and ISDN communications are carried out simultaneously by connecting a splitter upstream.

ADSL and ADSL2+ usethe frequency range between 138 kHz and 1.104 MHz, which is divided into the upstream range between 138 kHz and 276 kHz and the downstream range from 276 kHz to 1.104 MHz. The frequency range is subdivided into 256 channels with a bandwidth of 4.3125 kHz in the multitone method( DMT). The signal to be transmitted is divided into sub-signals that are transmitted via different carrier frequencies. With ADSL, transmissions of up to 6 Mbit/s can be realized via normal telephone cables; for bidirectional transmission, a second frequency band is available with transmission speeds of up to 640 kbit/s in the upstream. 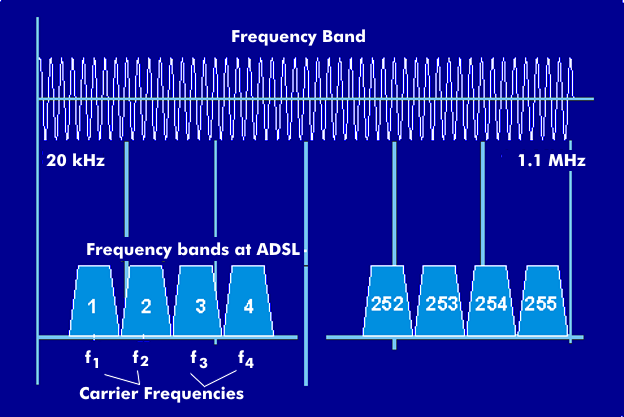 ADSL is used for interactive television in the terminal area. It is used to transmit digital video signals and offers an individual return channel as well as an individual TV channel. ADSL can be used equally for distribution services and interactive video services; including pay-per-channel, pay-per-view,video-on-demand and information-on-demand. The distance to the nearest node can be 4 km for transmission speeds above 1.5 Mbit/s, and up to 6 km for lower data rates.

The standardization of ADSL 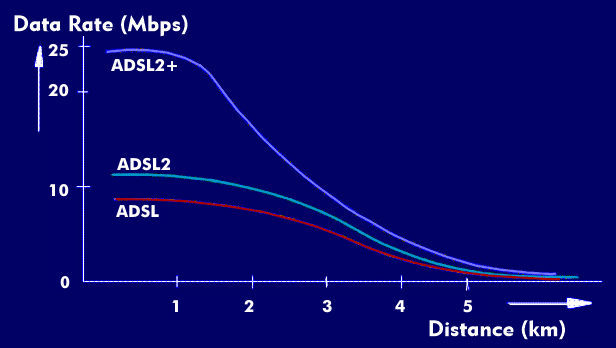 Data rates and distances of the different ADSL variants

The International Telecommunication Union( ITU) has published a reference architecture for ADSL under G.995.1. ADSL has been standardized by ded American National Standards Institute( ANSI) in T1E1.4 and also by the European Telecommunications Standards Institute( ETSI) in three versions, which differ in terms of coding, distance and transmission speed

ADSL2 uses DMT and can transmit video signals compressed with MPEG-2 at 3.072 Mbps and 4.608 Mbps. In addition, a control channel with 640 kbit/s is available. This method can be used up to distances of 3 km.

ADSL2+ also uses the multitone method and achieves data rates of up to 18 Mbit/s in the downlink. In ADSL2+, the frequency band of 2.2 MHz is divided into 512 channels. As part of the energy-saving discussion, two modes for power management were implemented for ADSL, of which the L2 mode contributes significantly to reducing power consumption. The L2 mode exists in ADSL2 The ADSL forum has been operating under DSL Forum since 2000.