Surge arresters (ÜSA), Arrester, are passive electrical components used in high and low voltage networks to discharge overvoltages. They are also found in power supplies of equipment and systems to protect electronic components against damage. The surge problem is particularly relevant in telecommunications equipment because transmission lines can absorb transient surges caused by lightning or switching surges. 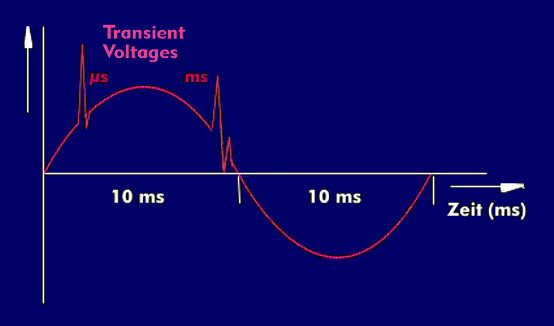 In normal operation, the spark gap is extremely high impedance with an insulation resistance greater than `10^10` ohms and an extremely low capacitance of a few picofarads (pF). When the ignition voltage is exceeded, the gas in the gas discharge gap ionizes and forms a conductive arc across which the overvoltage is dissipated. The gas discharge is caused by ionization of the noble gas and occurs in a few hundred milliseconds.

In addition to the surge arrester discussed here, there are various components for surge protection such as varistors, capacitors, Zener diodes, transil diodes, surge protection diodes or suppressor diodes, multilayer varistors and simple electronic circuits that protect against overvoltage.