Anti Reflective Coatings (ARC) are absorbent and non-reflective coatings that reduce optical surface reflections. There are single and multi-layer Anti Reflection Coatings for the absorption of specific wavelengths.

The anti-reflective coating works on the principle of the interference filter and reduces reflections of certain wavelengths. The most commonly used materials are titanium dioxide( TiO2) and silicon dioxide( SiO2). With these materials, perfect absorption of certain wavelengths can be achieved. The reflection coefficient then becomes zero. The non-reflective coatings prevent optical waves from canceling each other out due to interference. 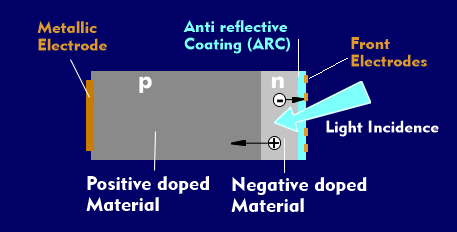 Anti-reflection layers consist of one or more individual layers that absorb different wavelengths and also compensate for the angle of incidence. Each photon hitting the solar cell is thus absorbed and enters the solar power generation.