There are various methods with which the resistance value of conductive materials can be influenced under the influence of a magnetic field. These effects, which are grouped under the generic term X-Magneto-Resistive(XMR), are implemented in magnetic field sensors and magnetometers.

Anisotropic Magneto-Resistive( AMR) uses the effect that the resistance value of magnetically highly permeable metal alloys changes due to the direction of the magnetic field. These alloys, such as permalloy or mu-metal, have a material structure in which the electrical resistance is directional, or anisotropic.

Properties of the various magneto-resistive processes 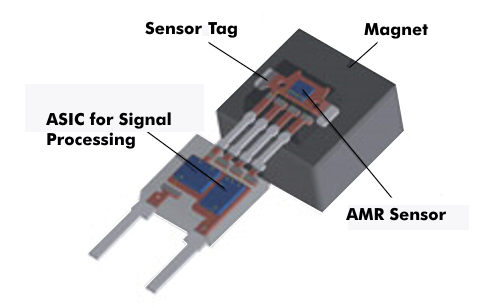 AMR magnetic field sensors consist of a very thin permalloy layer with ferromagnetic properties and thin metal strips that serve to correct for nonlinearities. There are two perpendicular directions of magnetization, one of which leads to the change in resistance when rotated.