In wireless power transmission, there are various transmission concepts that are supported and standardized by different organizations. For example, the work of the Wireless Power Consortium(WPC) is focused on magnetic induction( MI), whereas the Alliance for Wireless Power (A4WP), established in 2012, concentrates on transmission using magnetic resonance( MR).

In the wireless power concept developed by the A4WP Alliance, power is transmitted from a transmit resonant circuit to a secondary resonant circuit, both tuned to the resonant frequency of 6.78 MHz. The basic concept consists of the Power Transmitting Unit( PTU), which matches the supply voltage from the power supply to the Tx resonator, and the Power Receiving Unit( PRU), which decouples the transmitted power via resonant coupling and the Rx resonator and converts it to the charging voltage for the batteries via regulators and DC/DC converters. 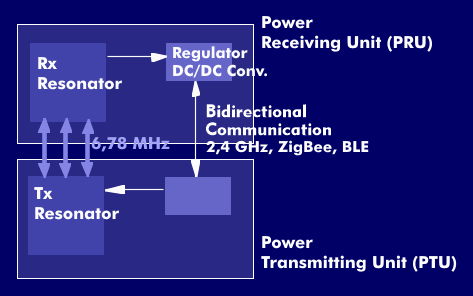 Block diagram of the A4WP concept

The distance between the two oscillating circuit coils can be 5 cm, and no exact positioning of the power receiving unit is required. In addition, one primary oscillating circuit can be used to power multiple receivers simultaneously. A power class of up to 22 W is provided for mobile devices such as smartphones and tablet PCs. The frequency ranges for power transmission are 6.78 MHz. The higher frequencies compared to the Qi standard (100 kHz to 300 kHz) result in more efficient energy transmission with lower coupling factors. In addition, frequencies in the ISM band at 2.4 GHz with ZigBee or Bluetooth Low Energy( BLE) are used for communication.

One technology based on A4WP is Rezence. This technology is used in the WiPower wireless charging technology developed by Qualcomm. In 2015, the Alliance for Wireless Power (A4WP) and the Power Matters Alliance( PMA) merged. The new alliance is called the AirFuel Alliance.