Active matrix OLEDs(AMOLED) are thin-film displays. They have better technical properties than passive matrix OLEDs, but are more complicated to manufacture because each individual OLED has its own power connection and is controlled via an active electronic component, a thin-film transistor.

AMOLEDs consist of multiple layers. On the anode layer, the thin film transistors(TFTs) are matrixed as an array, which is used to activate and deactivate each individual organic color pixel. Above the organic layer are the transparent cathodes. The flow of current across the thin-film transistor causes the AMOLEDs to light up. AMOLEDs are used for OLED displays and do not require backlighting because they are self-luminous. This results in much improved contrast levels compared to Passive MatrixOLEDs ( PMOLED) with backlighting. In addition, OLED displays have a much wider color gamut.

The advantage of active matrix OLEDs lies in their good contrast values and better energy utilization compared to PMOLEDs, LCD or TFT displays. This is due to the fact that pixels displayed in black are switched off and do not require power. Because of the lower energy required and the shorter response time, AMOLEDs are ideal for displays in mobile devices such as cell phones, PDAs and smartphones, but also for larger displays of televisions or digital picture frames. 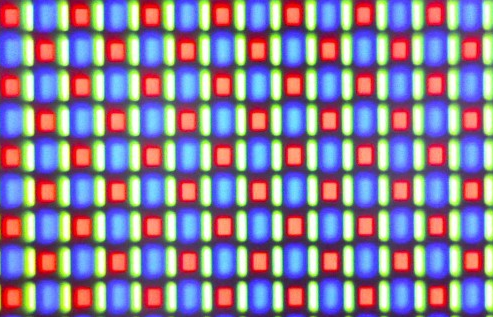 The power required by an AMOLED display depends very much on the brightness and colors displayed. On the downside, the contrast and brightness of AMOLEDs degrade over time, as does their shorter lifespan than passive matrix OLEDs. These disadvantages will be resolved as development progresses.