In general, an acronym is an abbreviation formed from the first letters of several words. Corresponding acronyms occur in abundance in information technology.

Some examples of many thousands of technical acronyms are: ATM stands forAsynchronous Transfer Mode or BAP, which stands for Bandwidth Allocation Protocol. 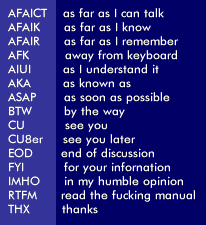 Acronyms are also used on the Internet, but they are used to describe idioms. They are a special form of abbreviations formed from the first letters of several words, often supplemented with digits, slurs, phonetic features or final letters. Such acronyms represent a shortened and slurred form of speech, because an abbreviation. Here are some examples of acronyms used on the Internet, in forums or in e-mails:

ASAP: As Soon As Possible, which stands for "as soon as possible."

B4 is an example of an acronym that consists of an initial letter and a number. B4 means "Before", which means "before" or "before".

An example of an acronym for adding a phonetic sound, a digit, and an ending letter is CUL8R: See You LateR, which stands for "until later".