Accelerated Graphics Port (AGP) is an I/O bus for an accelerated graphics connection. Here, the graphics data is processed directly by the graphics processor( GPU), which reduces the load on the central processing unit( CPU) and improves performance. 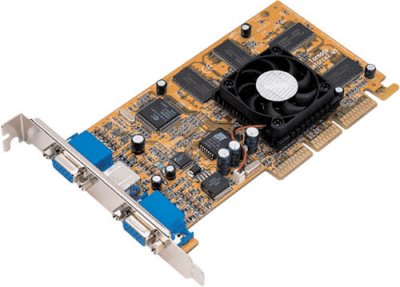 The AGP bus was designed in its basic conception (AGP 1x) for a clock rate of 66 MHz and thus had a maximum data transfer rate of 266 MB/s with a 32 bit bus. The signal voltage was 3.3 V. In the AGP 2x version, a 2-fold mode (AGP 2x), the rising and falling edge of the clock signal is used for the data transfer. The resulting data transfer rate is thus max. 532 MB/s. The signal voltage was allowed to be 1.5 V or 3.3 V. In 4x mode (AGP 4x), four data words are transferred with each clock pulse, which means a resulting data rate of 1.06 GB/s would be achievable. And in 8x mode, in which 8 data words are transferred per clock, even 2.1 GB/s are theoretically possible. The signal voltage is 1.5 V for AGP 4x.

AGP 8x cards only require 0.8 V signal voltage, but can also be operated with 1.5 V. There are also AGP-Pro cards, which are a bit longer and have room for a few additional power supply pins.

AGP is used exclusively for transferring graphics data. It has additional signal lines to control pipelining. With the AGP bus, a new data transfer can be initiated before the previous data transfer is complete. This also serves to accelerate graphics processing.

Since the data transfer rates on the AGP bus are extremely high, the use of Synchronous Dynamic RAMs( SDRAM) or Rambus DRAMs( RDRAM) is required.