Windows 8 is the further development of Windows 7. It was launched on the market in October 2012 and is characterized by a newly developed user interface compared to all other Windows versions. The display on the interface is designed as a universal concept for desktops, laptops, smartphones and tablet PCs and can be operated via touchscreens or with a keyboard and computer mouse. Windows 8, which is suitable for both laptops and tablets, is therefore ideal for hybrid PCs. Microsoft has developed several Windows 8 versions for home users, small businesses and large enterprises.

Windows 8 has an interesting user interface that is different from all previous ones. It consists of tiles rather than icons and pictograms, but they still exist on the lower- level desktop interface, which must be accessed. Microsoft calls the user interface the Modern User Interface (Modern UI). The tile design can be used in desktop, smartphones and tablets. This user interface can be operated with keyboard, mouse and touch screen. Tile design creates an immediate link from the apps, websites, emails, the application programs or odner to a particular person. The tiles can be enriched with live displays and also include important status pages for the user. For example, news, weather or stock market updates.

Windows 8 has an enhanced file system, Resilient File System( ReFS), but it still supports File Allocation Table( FAT) and New Technology File System( NTFS). Resilient File System uses a checksum method with which it ensures the integrity of user data. It also copies and backs up the data before changes are made. ReFS can manage files with a maximum size of '2^64', which corresponds to a size of 16 exabytes( EB). 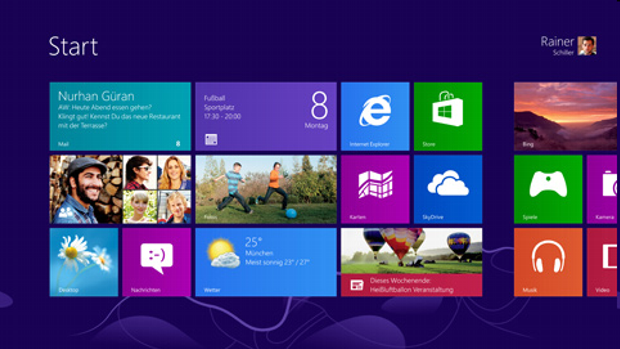 Windows 8 with tiles on the start page

Something has also changed in the task manager. To increase performance, inactive application programs are stopped and marked as such. The actual task manager arranges the active programs into categories.

For apps, the Windows Store is available, where you can download free and paid apps, purchase updates and test programs.

The different versions of Windows 8

Microsoft has developed several Windows 8 versions for private and professional applications. There's the Standard edition, which is aimed at home users and includes all the standard features as well as the newly added features. Furthermore, there is Windows 8 Pro, a version for small businesses. This version is the successor to Windows 7 Professional. This version includes all the features and a remote desktop. And for larger businesses, there is Windows 8 Enterprise, which includes advanced features for PC management, deployment, security and virtualization.