Video Graphics Array(VGA) is a display interface and the VGA format is a graphics standard for graphic screen displays.

The VGA interface is an analog display interface between graphics card and monitor via which the three analog color signals red, green and blue are routed. The interface was introduced by IBM in 1987 and had better characteristics than the EGA interface used at that time. The connector used for the VGA interface is a blue Sub-D connector with a three-row contact pin arrangement. On the computer side, it is a blue Sub-D female connector. The connector has a total of 15 contact pins for the analog RGB signals, for ground, the clock signal, the DDC signal, Display Data Channel (DDC), and for vertical and horizontal image synchronization. The VGA cable is a coaxial cable with an impedance of75 ohms. In simple version it can have a length of up to 5 m, in version with good shielding the cable length can be 15 m. 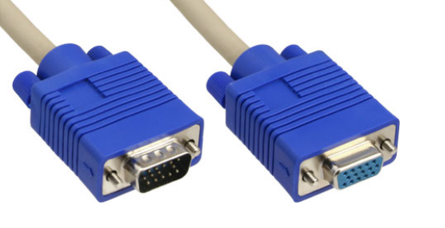 In the analog concept of the time, the digital signals were converted to analog signals on the graphics card in a DA converter and transmitted as analog signals. With today's flat panel displays, the conversion is no longer necessary, as these displays are digitally driven. Successor technologies to the VGA interface are the Digital Visual Interface( DVI), High Definition Multimedia Interface( HDMI) and DisplayPort.