The token method is an access method for ring systems that was developed in 1972 and is based on the token passing method. If no station has a send request, a special bit pattern, the token, circulates on the ring. The token in this case is in the form of a "free token"; it is a three- byte bit pattern. A station that wants to transmit must wait for the free token. If it receives it, it transforms the free token into a frame header. This is also referred to as an "occupied token".

In the simplest case, the two token forms differ by one bit. The packetized message is then appended to the frame header. The frame is then transported in the direction of communication from ring interface to ring interface. The receiver listens to the message and makes a copy. The frame travels around the ring until it reaches the sender, who removes it from the ring again. At the end of the message, the sender has to append a new free token. 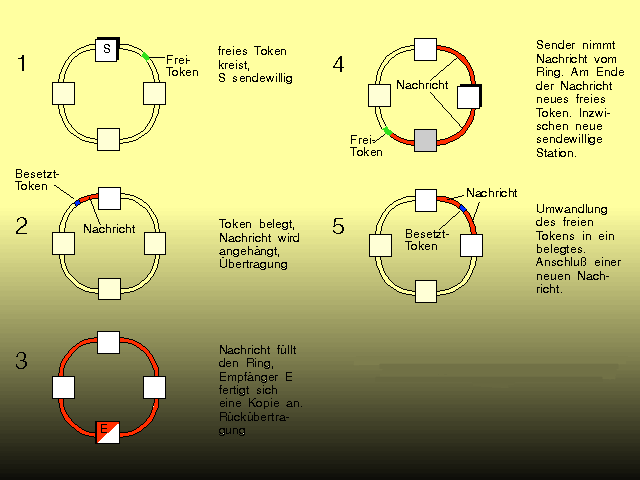 The new free token remains on the ring again in this form until a new station wants to transmit. It converts the token back into a frame that travels over the ring to the receiver and back to the sender. 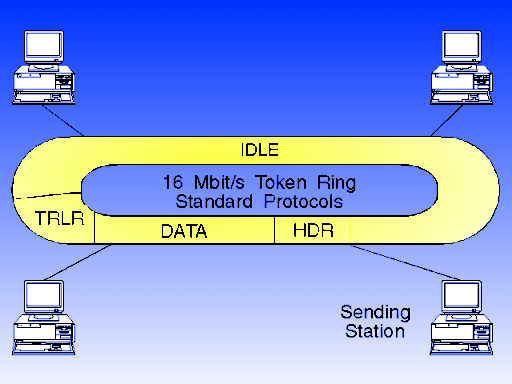 The Token Ring LAN operates at a transmission rate of 4 Mbit/s. The physical ring also corresponds to a ring in the logical query. The access procedure allows the formation of priorities, which ensures that stations with higher priority receive fast media access.

The procedure described, in which either a token or a frame is located on the ring, is used for both token ring variants, the one with 4 Mbps and the one with 16 Mbps. The 16 Mbit/s version differs from the 4 Mbit/s version in that several frames can be traveling on the ring at the same time in the faster variant. This method is called the early token release method and offers particular advantages for extensive token ring networks because it compensates for the session length, i.e. the dwell time, of token and frame in the ring by using multiple frames.