StarFabric is a high-speed serial interconnect technology for transparent, serial PCI extensions. StarFabric translates the parallel data traffic of the PCI bus or CompactPCI( CPCI) into a serial data format and transmits the data over distances of up to 12 m via STPcategory 5( Cat 5) cables. The scalable switching capacity of the switching fabric is several terabits per second (Tbit/s) and supports data rates of 2.5 Gbit/s per link in both directions.

As a transmission technology, StarFabric uses Low Voltage Differential Signaling( LVDS) with the defined data rates of 622 Mbps. The four LVDS line pairs can transmit 2.5 Gbit/s in both directions. This results in 5 Gbit/s and channel and with two bridge ports a total data rate of 10 Gbit/s. 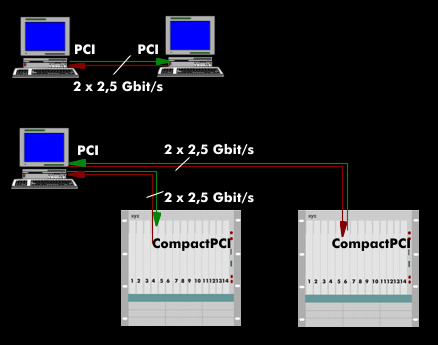 StarFabric can be implemented as a bridge or switch. As a bridge with two links for connecting PCI and CompactPCI or as a cascadable switch for networking many PCI buses with several hundred end points. The data is transmitted using 8B/10B coding. Flow control is performed using the credit method, which means that only those data packets are transmitted that are actually accepted, making StarFabric technology also of interest for industrial real-time applications. For error detection and correction, StarFabric also works with cyclic block checking(CRC) and can switch from an error-prone transmission path to an intact one in the event of an error. The same applies to failover in cluster systems.

StarFabric is used in backplanes of industrial computers and is also specified for AdvancedTCA, ATCA.