Passive RFID tags differ from semi-passive ones in that the passive ones derive the operating voltage from the inductive or electromagnetic field, whereas the semi-passive ones have a small battery that powers the volatile memories. Active RFID transponders have a battery and also a transmitter for data transfer. 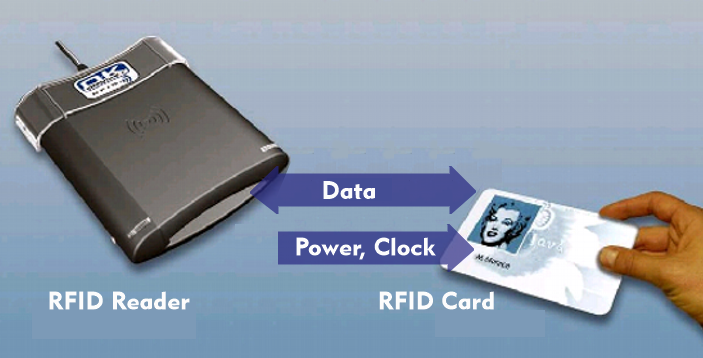 Energy and data transfer between RFID reader and card

To read data from an RFID tag, the RFID reader generates a high-frequency electromagnetic field at the appropriate RFID frequency. The RFID tag, which is placed in the vicinity of the alternating field, receives the carrier signal and derives a voltage from it, which is used to charge the battery of the passive and semi-passive tags. This voltage forms the supply voltage of the microprocessor. The signal transmissionfrom the tag is carried out by a kind of load modulation of the RF field from the reader, in which the microprocessor switches components on and off, thus influencing the alternating field. Depending on the frequency, the power generation and load modulation are done with inductive or electromagnetic coupling.

In the case of RFID devices, there are also combined read/write devices with which RFID tags can be read and written.