Radio Frequency Identification(RFID) is the wireless transmission of uniquely marked codes for the identification of goods, commodities, services and persons. In general, the radio transmission of RFID data can take place on all radio frequencies, but is limited for certain ISM bands, as these are license-free.

The different frequency bands differ in their characteristics with regard to the bridgeable distance between RFID tag and RFID reader, the penetration of the goods and the influence of electromagnetic interference. The International Standards Organization( ISO) and EPCglobal participate in the standardization of RFID technology.

The lowest frequency range for RFID is in the long-wave range between 30 kHz to 135 kHz; these frequencies are used in Europe, but also in North and South America and in Japan, mainly for RFID cards. This technology works with inductive coupling at a frequency of 125 kHz. Since at these frequencies the transmission rate and also the range are relatively low - they range from a few centimeters to a meter - and also the antenna is extremely long, they are not used too often, mainly in industrial environments, in immobilizers and access control. 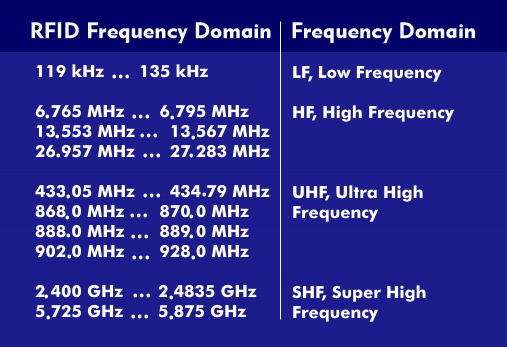 There are several RF ranges, namely at 6.78 MHz, 13.56 MHz, 27.125 MHz and 40.680 MHz, all of which are in ISM bands. In these ranges, RFID transmission has a range between a few centimeters and a few meters. Transmissions are made on 13.56 MHz at relatively high data rates. In the UHF range, several frequency bands are available for RFID at 433.920 MHz and in the frequency range between 860 MHz and 950 MHz. In Europe, the frequency range around 868 MHz is used, the USA the one around 915 MHz and Japan the one around 950 MHz. With all these UHF frequencies, ranges of up to 100 m can be bridged.

The microwave bands of RFID

With 2.45 GHz and 5.8 GHz, ISM bands in the microwave range are also used for RFID. There is another frequency range with frequencies of 24.125 GHz for these microwave tags. Microwave tags are characterized by a high reading speed, and the bridgeable ranges are between 1 m and 10 m. They are therefore used in applications with fast-moving objects such as motor vehicles or in toll stations.

EPCglobal, an international organization for the further development of the Electronic Product Code( EPC), has specified the transmission frequency for RFID tags at 866 MHz to 956 MHz.