The RF Communication Protocol (RFCOMM) is a Bluetooth protocol that emulates the serial connection of an RS-232 interface with its control and data signals via the air interface.

The RFCOMM protocol belongs to the Bluetooth host protocols and is also called "Cable Replacement Protocol". RFCOMM can multiplex connections in Bluetooth via the Logical Link Control and Adaptation Protocol( L2CAP) and serve a maximum of 60 RS-232 connections. 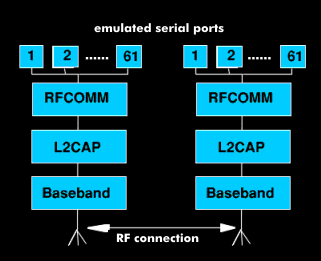 Connection via RFCOMM from Bluetooth

RFCOMM is based on the ETSI standardTS 07.10 and Q.931 of the International Telecommunication Union( ITU).