The Pentium 4's performance explosion compared to its predecessors can be seen in the enormous computing power of 2661 MIPS achieved at a clock frequency of 1.5 GHz. That is over 500 times as much computing power as the first 32-bit 80386 processor had, which had 4 MIPS at 16 MHz.

Technology leaps also take place between these two 32-bit processors: Whereas the 80386 had 275,000 transistors with a structure track width of 1.5 µm, the Pentium 4 has more than 40 million transistors and 0.18-(0.13)µm technology. This corresponds to Extra Large Scale Integration( ELSI). The codename for the 130 nm technology was Northwood, the later 90 nm technology had the codename Prescott. 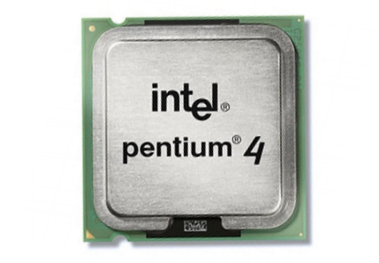 Like its predecessor, the Pentium III, the Pentium 4 has two Level 1 caches, each with 16 kilobytes( KB) for data and instructions, and a Level 2 cache with 256/512 KB. The addressable physical memory space is 64 gigabytes( GB), the virtual 64 terabytes( TB).

The Pentium 4 has the so-called NetBurst Micro architecture as CPU core, which ensures more efficient instruction processing. The concept contributes 20 pipeline stages and thus distributed instruction processing on the different stages. In addition, the clock rate can be increased due to the longer pipeline, which is reflected in the increased computing power.

The Pentium 4 has a RISC engine with 128 registers and an improved StreamingSIMDExtension, with 144 new instructions. The Front Side Bus( FSB) works with quadrupling the clock signal, the Quad Data Rate( QDR), where four data sets are transferred at once per clock period. The clock frequency of 100 MHz thus corresponds to an effective clock frequency of 400 MHz. Data transfer rates of 3.2 GB/s are achieved with the QDR technology, but this can only be fully utilized with Rambus DRAM.

The Pentium 4 Extreme Edition version operates with a clock frequency of 3.2 GHz and has a 2 MBLevel 3 cache.