Since different data is transferred via the buses, they are divided into a data bus, address bus and control bus, each of which has a different bus width. Data buses are oriented to the data word width of the microprocessor, they can transmit a data word width of 8, 16, 32 or 64 bits in parallel. The address bus is used to address the internal components and the external individual devices. The control bus handles the bus request, interrupts, handshaking, etc. and the supply bus contains the supply and clock lines. 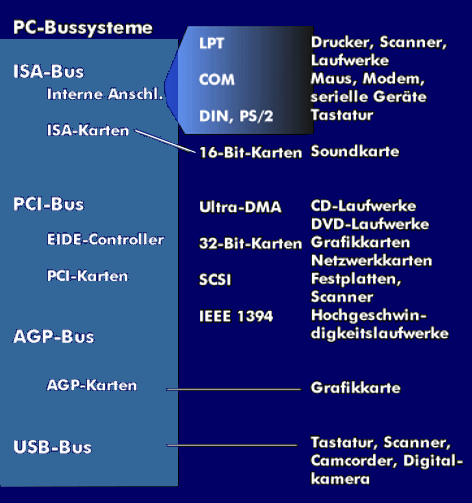 From this first bus concept, many bus concepts have emerged over the years, all based on the developments of the time. The best known system bus es of personalcomputers (PC) are the PCI bus and the AGP bus. In addition, there is the AT bus, MCA bus, local bus, NuBus, VLB bus, MCA bus and, with a 64-bit structure, the VME bus. Some of these buses no longer play a role, just like the ISA bus and the EISA bus.

Many of the bus systems mentioned exist in several versions, which differ in bus width, bus speed and data transfer rate. For example, there is the PCI bus in a 32 and 64 bit version, the AGP bus with the highest data transfer rates of 533 MB/s, 1,066 MB/s and 2,032 MB/s or SCSI in about 10 variants.